This list of works by and about Pauli Murray will allow you to learn more about their life and writing. Featuring the works of Murray at the beginning of the list, scroll down for biographies and more. Dark Testament and Other Poems (Liveright, 2018)

Dark Testament and Other Poems

From the publisher: For readers discovering the great civil rights activist Pauli Murray, here, at last returned to print, is Dark Testament and Other Poems, Murray’s sole poetry collection and a revelatory work crucial to her identity as a “rebel, instigator, survivor…opener-of-doors, and always a devout child of God and friend to mankind” (Patricia Bell-Scott).

Now that I have climbed

The steep battlements of the universe,

And gazed daylong upon the sun,

I am weary of the stout heart’s solitude,

Bewildered by mutterings of the spheres,

I would creep once more beneath a friendly stone,

My dust contained in earth’s embrace. Song in a Weary Throat: Memoir of an American Pilgrimage (Liveright, 2018)

Song in a Weary Throat: Memoir of an American Pilgrimage

From the publisher: In a voice that is energetic, wry, and direct, Murray tells of a childhood dramatically altered by the sudden loss of her spirited, hand-working parents. Orphaned at age four, she was sent from Baltimore to segregated Durham, North Carolina, to live with her unflappable Aunt Pauline, who, while strict, was liberal-minded in accepting the tomboy Pauli as “my little boy-girl.” In fact, throughout her life, Murray would struggle with feelings of sexual “in-betweenness” – she tried unsuccessfully to get her doctors to give her testosterone – that today we would recognize as a transgender identity.

We then follow Murray north at the age of seventeen to New York City’s Hunter College, to her embrace of Ganghi’s Satyagraha – nonviolent resistance – and south again, where she experience Jim Crow firsthand. Murray’s activism led to relationships with Thurgood Marshall and Eleanor Roosevelt – who respectfully referred to Murray as a “firebrand” – and propelled her to a Howard University law degree and a lifelong fight against “Jane Crow” sexism.

Now, more than thirty years after her death in 1985, Murray – poet, memoirist, lawyer, activist, and Episcopal priest – gains long-deserved recognition through a rediscovered memoir that serves as a “powerful witness” (Britney Cooper) to a pivotal era in the American twentieth century. 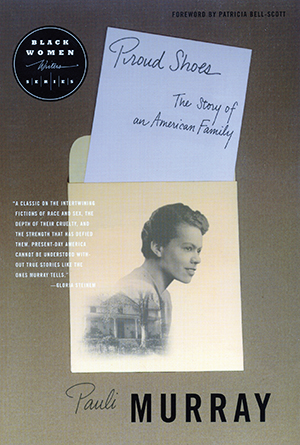 Proud Shoes: The Story of an American Family (Beacon Press, 1999)

Proud Shoes: The Story of an American Family

From the publisher: First published in 1956, Proud Shoes is the remarkable true story of slavery, survival, and miscegenation in the South from the pre-Civil War era through the Reconstruction. Proud Shoes chronicles the lives of Pauli Murray’s maternal grandparents. From the birth of her grandmother, Cornelia Smith, daughter of a slave whose beauty incited the master’s sons to near murder, to the story of her grandfather, Robert Fitzgerald, whose free black father married a white woman in 1840, Proud Shoes offers a revealing glimpse of our nation’s history.

In later years, it has occurred to me that my grandfather’s impact on my life may have been responsible for my decision to become a civil rights lawyer, while my grandmother’s influence may have led me finally into the ordained ministry. Certainly, it would be fair to say that these two traditions – each making its own strong claims – have been major determinants in my own development. And while sometimes the one and sometimes the other has been in the forefront of my consciousness, neither has yielded the field, and both must be the ultimate measure of my own existence. 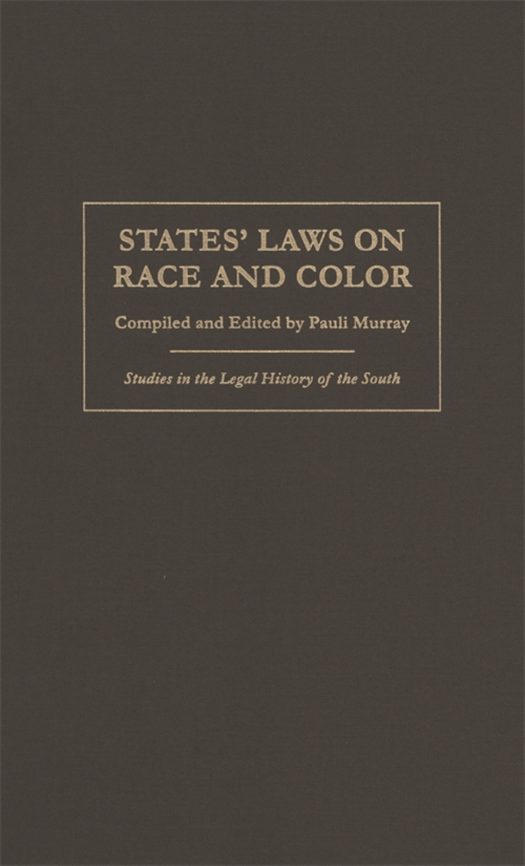 States' Laws on Race and Color (University of Georgia Press, 2016)

States’ Laws on Race and Color

From the publisher: This remarkable, hard-to-find resource is an exhaustive compilation of state laws and local ordinances in effect in 1950 that mandated racial segregation and of pre-Brown-era civil rights legislation.

The volume cites legislation from forty-eight states and the District of Columbia, and ordinances of twenty-four major cities across the country. The complete text of each law or ordinance is included, along with occasional notes about its history and the extent to which it was enforced.

In his introduction Davison M. Douglas comments on the legislation compiled in the book and its relevance to scholars today and also provides biographical background on Pauli Murray, the attorney who was the volume’s original editor. The Constitution and Government of Ghana (coauthor with Leslie Ruben)

From the journal review: This useful introduction to the local government system of Ghana is written mainly with the needs of the councillors [sic], local government officers and others who are concerned with the system of government, in mind. After a useful explanation of the fundamental changes made in the system of local government as a result of the Greenwood Report, the author deals with the system with special reference to the procedure for election of members of councils, the main functions of local authorities, local government finance, and the practical working of local authorities, for example, the operation of the committee system. Tips about office arrangement and procedure are also included. Altogether this would appear to be a very handy and practical introduction to the subject.

This title is difficult to find as it was published in the Journal of African Law, an academic journal with limited access that is now published through Cambridge University Press.

For a list of articles written by Rev. Dr. Murray, please see the list created by the Pauli Murray Center for History and Social Justice. Several of the articles include links to read them online. The Firebrand and the First Lady: Portrait of a Friendship: Pauli Murray, Eleanor Roosevelt, and the Struggle for Social Justice (Vintage, 2017)

The Firebrand and the First Lady: Portrait of a Friendship: Pauli Murray, Eleanor Roosevelt, and the Struggle for Social Justice by Patricia Bell-Scott

From the publisher: In 1938, the twenty-eight-year-old Pauli Murray wrote a letter to the President and First Lady, Franklin and Eleanor Roosevelt, protesting racial segregation in the South. Eleanor wrote back. So began a friendship that would last for a quarter of a century, as Pauli became a lawyer, principal strategist in the fight to protect Title VII of the 1964 Civil Rights Act and a co-founder of the National Organization of Women, and Eleanor became a diplomat and first chair of the United Nations Commission on Human Rights.

A definitive biography of Murray, a trailblazing legal scholar and a tremendous influence on Mrs. Roosevelt. Pauli Murray: Shouting for the Rights of All People (Morehouse Publishing, May 2022)

Pauli Murray: Shouting for the Rights of All People by Deborah Nelson Linck

From the publisher: The first introductory and illustrated biography of the civil rights icon.

The untold story of Pauli Murray, activist, lawyer, poet, and Episcopal priest, who broke records and barriers throughout her life. Friend to Eleanor Roosevelt, colleague to Ruth Bader Ginsburg, and student of Thurgood Marshall, Pauli Murray’s life was nevertheless not always an easy one. Her commitment to fighting for the rights of women and all places her firmly in history. A celebration of her life and its significance, including the role of gender identity in her own journey. From the publisher: Inspiring and timely, Pauli Murray’s Revolutionary Life is the riveting story of an African American woman, born in 1910, who blazed through the barriers of race and gender decades before the Civil Rights and Women’s Movements. Pauli Murray fearlessly rode freight trains dressed as a boy during the Great Depression and befriended First Lady Eleanor Roosevelt before embarking on a pioneering life of social activism, legal scholarship, and many firsts. In 1944, Pauli graduated first in her class at Howard University; in 1965, she was the first Black woman to earn a doctorate in law from Yale University; in 1966, she was a founder of NOW, the first National Organization for Women; and in 1977, Pauli was the first Black woman to be ordained as an Episcopal priest. Pauli never faced a barrier she couldn’t smash through, and her life as a feminist, civil rights lawyer, poet, author, activist, and priest paved the way for all to live a life of equality and purpose. Pauli Murray: The Life of a Pioneering Feminist and Civil Rights Activist by Terry Catasús Jennings and Rosita Stevens-Holsey

From the publisher: Pauli Murray was a trailblazer who spent her life fighting for civil rights and women’s rights. Writer, lawyer, activist, priest, Pauli was a champion for justice. Her extraordinary life is immortalized in this riveting biography told in verse.

Pauli Murray was a thorn in the side of white America demanding justice and equal treatment for all. She was a queer civil rights and women’s rights activist before any movement advocated for either–the brilliant mind that, in 1944, conceptualized the arguments that would win Brown v. Board of Education of Topeka; and in 1964, the arguments that won women equality in the workplace.

Throughout her life, she fought for the oppressed, not only through changing laws, but by using her powerful prose to influence those who could affect change. She lived by her convictions and challenged authority to demand fairness and justice regardless of the personal consequences. Without seeking acknowledgment, glory, or financial gain for what she did, Pauli Murray fought in the trenches for many of the rights we take for granted. Her goal was human rights and the dignity of life for all. Jane Crow: The Life of Pauli Murray by Rosalind Rosenberg

From the publisher: Throughout her prodigious life, activist and lawyer Pauli Murray systematically fought against all arbitrary distinctions in society, channeling her outrage at the discrimination she faced to make America a more democratic country. In this definitive biography, Rosalind Rosenberg offers a poignant portrait of a figure who played pivotal roles in both the modern civil rights and women’s movements.

“Placing Murray in historical context with practiced ease, Rosenberg weaves these many threads together into an authoritative narrative that will introduce Murray to many future generations.”